Hyundai Eon Claims India Is “On”!!

Maruti Alto remains to be a charismatic leader in the
entry-level hatch segment, ranking at the top ever since its launch in the sales
figures. There is nothing to be surprised of this because it’s a Maruti, a
buzz-word dominating the Indian market. But if there is one company that can
challenge Maruti, it ought to be Hyundai. In fact, it’s a threat not just to
budget brands, but to big-wigs as well, even in the international market. Now
with its stylish Eon hatch, Hyundai plans to expand its reign in the Indian
small car market to take on the Alto head-on.

The Hyundai’s “India-On with Eon” campaign is
nothing but an outright “Alto-Off” propaganda. With the Eon, Hyundai has proved
convincingly that cheap cars don’t have to look cheap, and with just one of its
swoopy lines, it has made the Alto look completely dated. The Hyundai’s ‘Fluidic
sculpture’ design has worked wonders to give this car a bold and distinctive
look, unlike a typical budget car. The hexagonal grille and the large,
swept-back headlamps with almost-triangular fog lamps dominate the face. The
smart crease on the lower portion of the doors and the fluidic lines are very
well executed. The rear is smart, with crescent-shaped tail lights and high
bumper.

All the variants of the Eon feature a two-tone
interior colour scheme. The dashboard design and its layout, though not as
radical as the exterior, are attractive and exciting for a car of this segment.
The instrument cluster with LEDs are clear and easy-to-read and features a
readout that alerts you exactly when to shift gears, to achieve optimal fuel
economy. The dashboard uses good quality plastics and fit and finish is also
impressive. The rear knee room is just adequate and the head room is quite
limited, thanks to its rising window line.  In a nutshell, the interior is top class and
oozes a level of feel-good factor not seen on cars in this class.

The Eon comes with a 3-cylinder 814cc petrol engine
with a power output of 55bhp to a 5-speed gearbox taken from the Santro. It is
best suited for city-driving as the engine lacks the pep, but the refinement
levels are decent. Shifting down a gear is mandatory for overtaking bigger
vehicles. The notchy gearbox is however not so nice to use. But the smaller
engine with light kerb weight makes the Eon exceptionally fuel efficient. The
ARAI-certified fuel economy figure is an impressive 21.1kmpl. The suspension is
a combination of McPherson struts in front and a torsion beam at the rear,
common for cars of this class. The ride is very absorbent and straight-line
stability on the highway is also good. The steering feels direct with decent handling-dynamics. 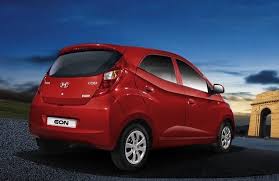 The well-specced top-end Sportz variant cost Rs.3.71
lakh, making the Eon slightly more expensive than the Alto K10 variants. But
its eye-catching design, lightness and easy to drive character will endear it
to newbie drivers, who will undoubtedly form a large portion of its customer
base. Given the Hyundai’s vast service network and a stress-free ownership
experience, the new Eon will quickly make good numbers on Indian roads.

Editorial consultant (Automotive and Technology), academic, and blogger based in India. He can be reached at wagenclub@gmail.com